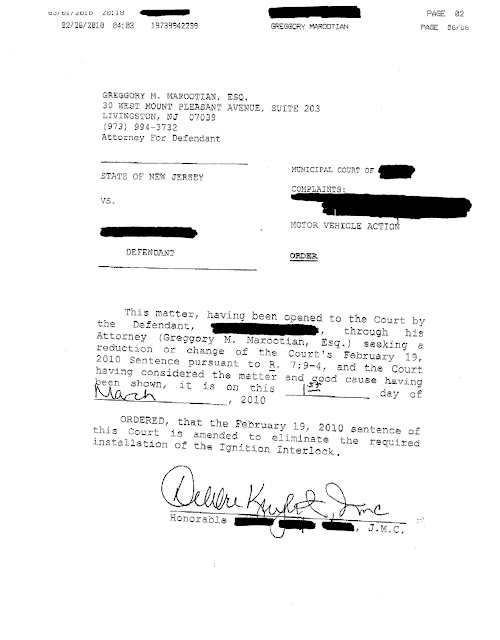 FOUR THINGS THAT YOUR LAWYER MIGHT NOT WANT YOU TO KNOW

By: Greggory M. Marootian, Esq.
NJ DWI Specialist
“An Educated Consumer is Our Best Customer” was the slogan used by Syms, a successful NJ clothing retailer. Choosing a Lawyer for a NJ DWI charge involves trying to become generally educated about a profession and system which many people have limited knowledge of. The following is a list of things that a lawyer might not want you to know.
1. The Lawyer Has Limited Knowledge Of New Jersey DWI Law. Smart Money magazine published an article called “10 Things Your Lawyer Won’t Tell You.” Among the 10 Things was that the lawyer does not know the area of law for which he was hired. Below is an expert from the article:

Ask an attorney about anything outside his niche, and odds are he won’t know much. Teacher Marie Karim learned that when she decided to sue the New York City hospital where she had developed an infection and a hernia during exploratory surgery in 1999. Karim hired Sheri B. Paige because her mother had once consulted the Norwalk, Conn., lawyer about collecting a debt. Karim says Paige assured her that she had experience with medical malpractice cases.

More than a year later, Karim says she discovered that Paige had virtually no such experience and that she hadn’t even filed the suit. Worse yet, the statute of limitations had run out. “I wanted to kill her,” says Karim, who got $325,000 from Paige’s insurance company in 2002 with assistance from a specialist in legal malpractice. Paige denies all wrongdoing and blames the entire mess on Karim. But in November 2002, a Connecticut lawyer grievance panel found probable cause to believe that Paige was guilty of misconduct, and she was disbarred in 2005.
Moral of the story: Karim should have hired an expert in the area of law she needed—someone who does almost nothing but medical malpractice.

2. The Lawyer Has Never Actually Taken A DWI Case To Trial Or Has Limited DWI Trial Experience. Believe it or not, there are lawyers who handle DWI cases who have never actually tried a DWI case. There are lawyers who have been in practice for many years who have never even tried a single DWI case or have only tried a few DWI cases over their careers.
As much as a lawyer has been taught in school and from books, the simple reality is that you cannot teach experience, and you cannot teach expertise. I learned to drive a car in High School sitting at a simulator and then behind the wheel with a driving instructor and with my father. There are simple skills (like turning the wheel, stopping, and using the pedals and blinkers) that can be mastered during training. However, the true “learning to drive” comes from years of being on the road with other drivers, in varied weather and traffic conditions, and even navigating around (and surviving) danger. Similarly, trying numerous DWI cases gives a range of experience and expertise that simply cannot be duplicated.
There are lawyers who have a lot of trial experience, but they have none or little DWI trial experience. These lawyers may have tried injury cases, contract dispute cases, even murder and other criminal felony cases. They may even be “certified” criminal or civil trial lawyers. But, their trial experience is in trials other than DWI trials.
I am a baseball fan (Yankees for anyone who wants to know). In 2009, the New York Mets placed Daniel Murphy, a natural third baseman, at first base. Murphy, a very talented athlete, and a solid third baseman struggled at the new position. Baseball pundits, talking about the switch and Murphy’s troubles, agreed that playing third base and first based are markedly different positions requiring many different skills. Despite his natural skills, Murphy’s lack of experience as a first baseman caused him to flounder at the position. Similarly, trying and focusing on DWI cases affords experience that cannot be duplicated by trying other types of cases.
3. The Lawyer Has Never Won A DWI Case On Appeal Or Even Appealed A DWI Case. Trying cases sometimes requires that an adverse verdict or ruling be appealed. An appeal is a request to a higher court to change a lower court decision. In a New Jersey DWI case, the Court structure is (from bottom to top): (1) Municipal Court, (2) County Superior Court, (3) Superior Court Appellate Division, and (4) New Jersey Supreme Court.
Appeals are intricate. Knowledge of the substantive law, experience in actual DWI trials, and lastly, knowing the appeals process are important.
4. The Lawyer Regards Your DWI Case As “Small Potatoes”, And Will Pass It Along To A Low Rung Associate, Or Pay More Attention To His Bigger Cases. Some firms that handle large cases (example, criminal felony type cases, and large personal injury cases) also take DWI cases. Some regard a DWI case as a “minor” case. Some will pass the case along to a young, inexperienced associate so that they can pay attention to the “bigger” cases, or give the file less attention.
As you get “educated” about the law, the process, and the legal profession, you should know whether your attorney:
1. Has he tried at least 100 DWI cases from start to finish?
2. Has won DWI cases after a full trial?
3. Has won DWI cases on appeal at the County level and in the Appellate Division?
4. Has written about DWI Law?
5. Will be the attorney who will handle your case?
In October 2009, I blogged about a NJ DWI trial I handled:
http://newjerseydwilawyer.blogspot.com/2009/10/unfair-nj-dwi-trial-appeal.html
The State claimed a blood alcohol concentration of .25% through a direct blood draw (as opposed to a breath reading). The laboratory technician who analyzed my client’s blood was not called as a witness by the State (she was not available). I argued that based on the prevailing law, the certified laboratory result (purporting to show her blood alcohol concentration) was therefore inadmissible “hearsay.” (For a general definition of hearsay, see: http://en.wikipedia.org/wiki/Hearsay) The Municipal Court rejected that argument, and over my strenuous objection, admitted the laboratory certificate into evidence.
My client appealed. In January of this year, I appeared before the Honorable Harold W. Fullilove in the Essex County Superior Court in Newark for the appeal hearing. Judge Fullilove reversed the ruling of the Municipal Court, and entered a Not Guilty finding to the DWI. The Court’s Letter Opinion and Order are attached. I have, out of respect and decorum, omitted the Municipal Court and the Judge. 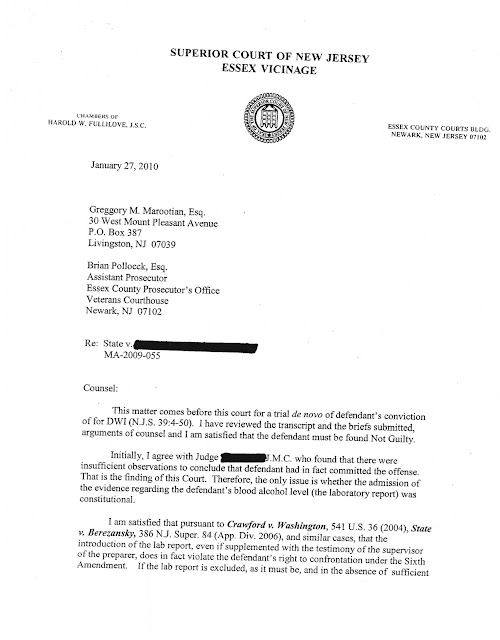 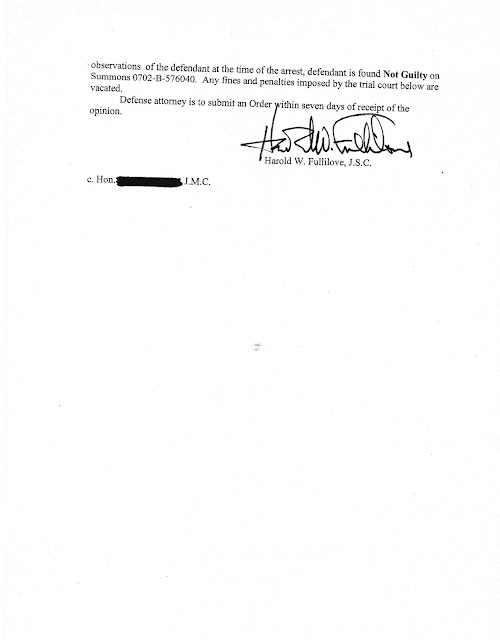 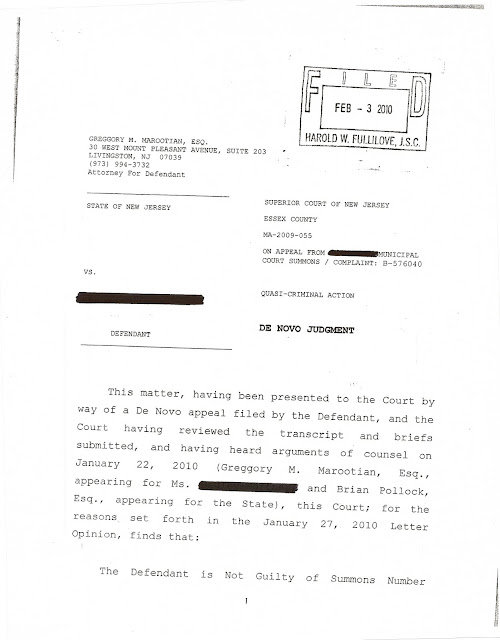 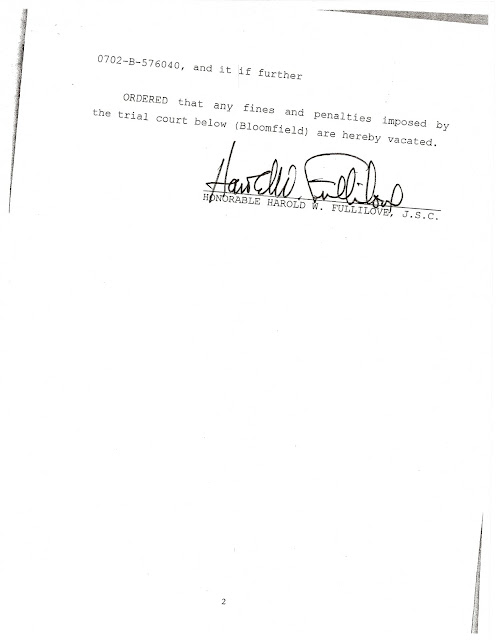